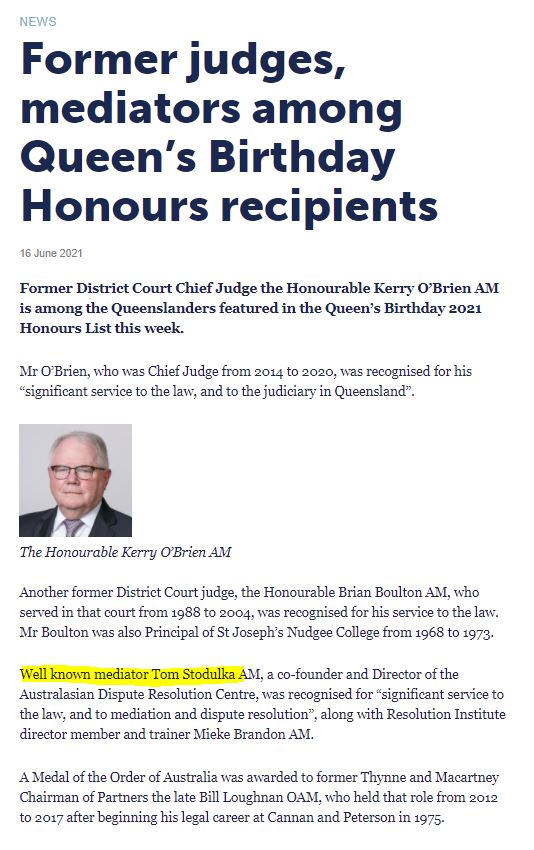 Former District Court Chief Judge the Honourable Kerry O’Brien AM is among the Queenslanders featured in the Queen’s Birthday 2021 Honours List this week.

Mr O’Brien, who was Chief Judge from 2014 to 2020, was recognised for his “significant service to the law, and to the judiciary in Queensland”.

Another former District Court judge, the Honourable Brian Boulton AM, who served in that court from 1988 to 2004, was recognised for his service to the law. Mr Boulton was also Principal of St Joseph’s Nudgee College from 1968 to 1973.

Well known mediator Tom Stodulka AM, a co-founder and Director of the Australasian Dispute Resolution Centre, was recognised for “significant service to the law, and to mediation and dispute resolution”, along with Resolution Institute director member and trainer Mieke Brandon AM. 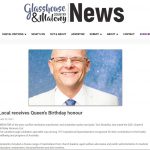 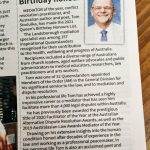 MEDIATOR of the year, conflict resolution practitioner, and Australian author and poet, Tom Stodulka, has made the 2021 Queen’s Birthday Honours List. The Landsborough mediation specialist was among 157 inspirational Queenslanders recognised for their contribution to the health, wellbeing and progress of Australia.

Recipients included a diverse range of Australians from church leaders, aged welfare advocates and public administrators to medical educators, researchers, law practitioners and arts workers. Tom was one of 32 Queenslanders appointed Members of the Order (AM) in the General Division for his significant service to the law, and to mediation and dispute resolution.